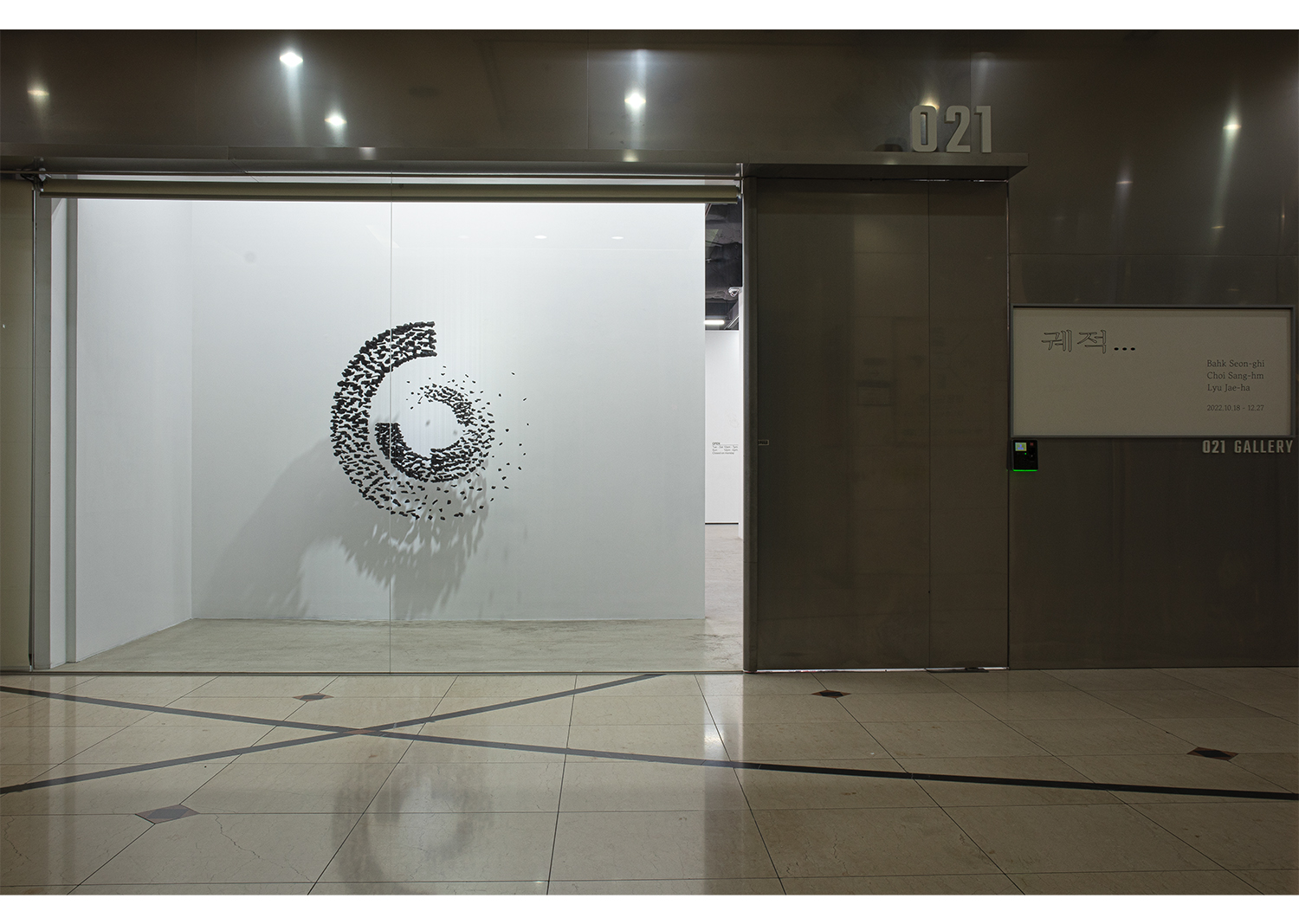 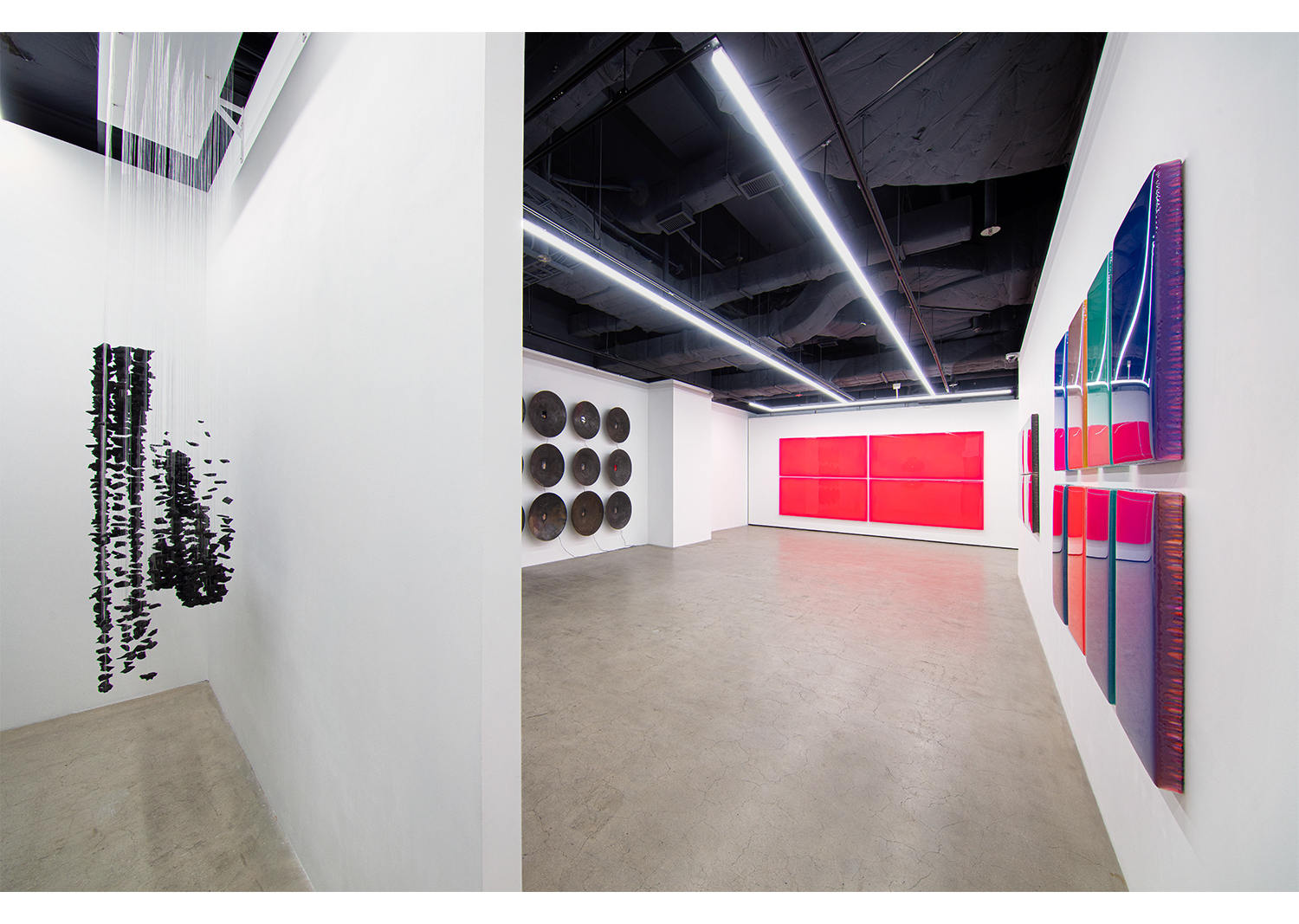 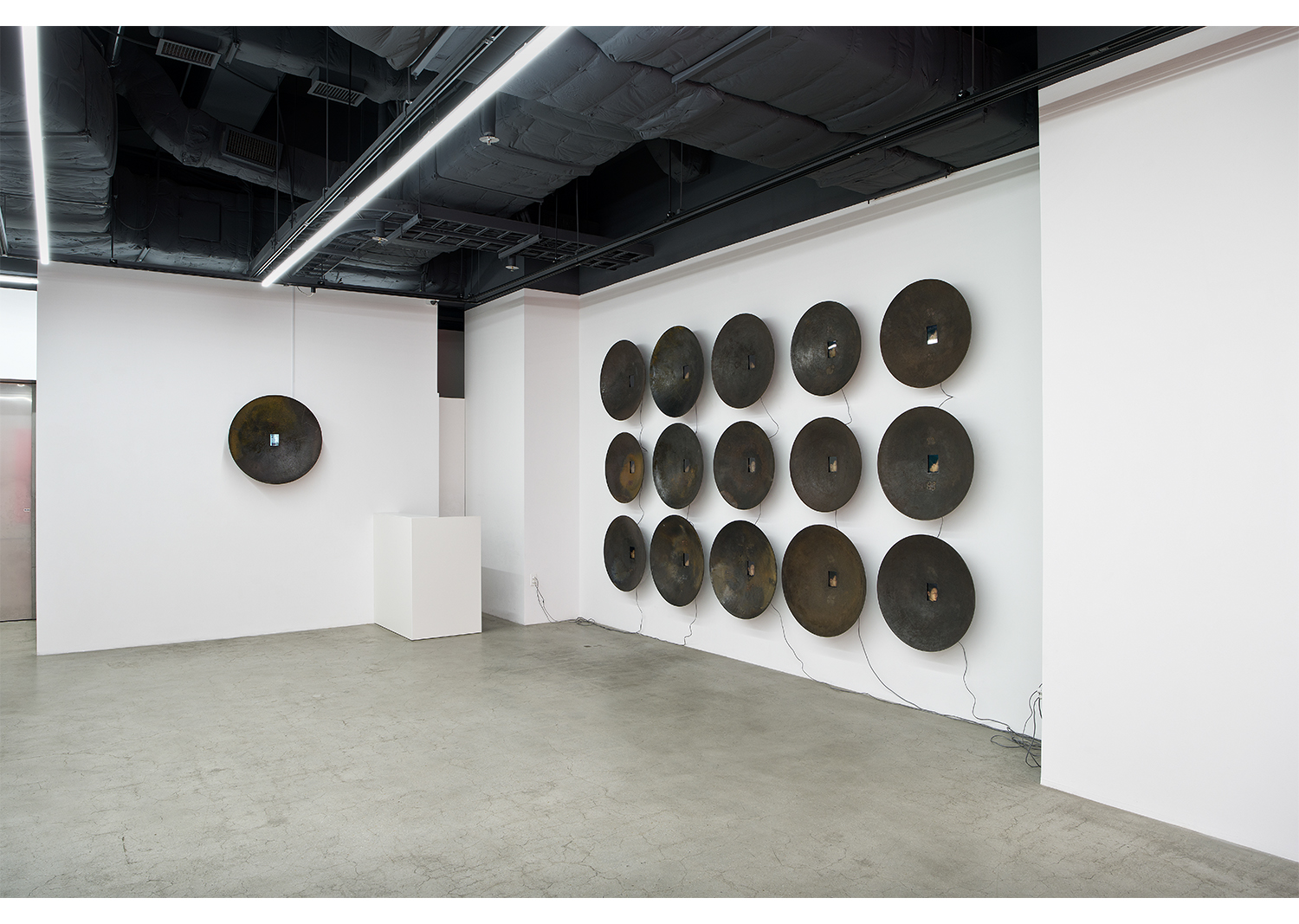 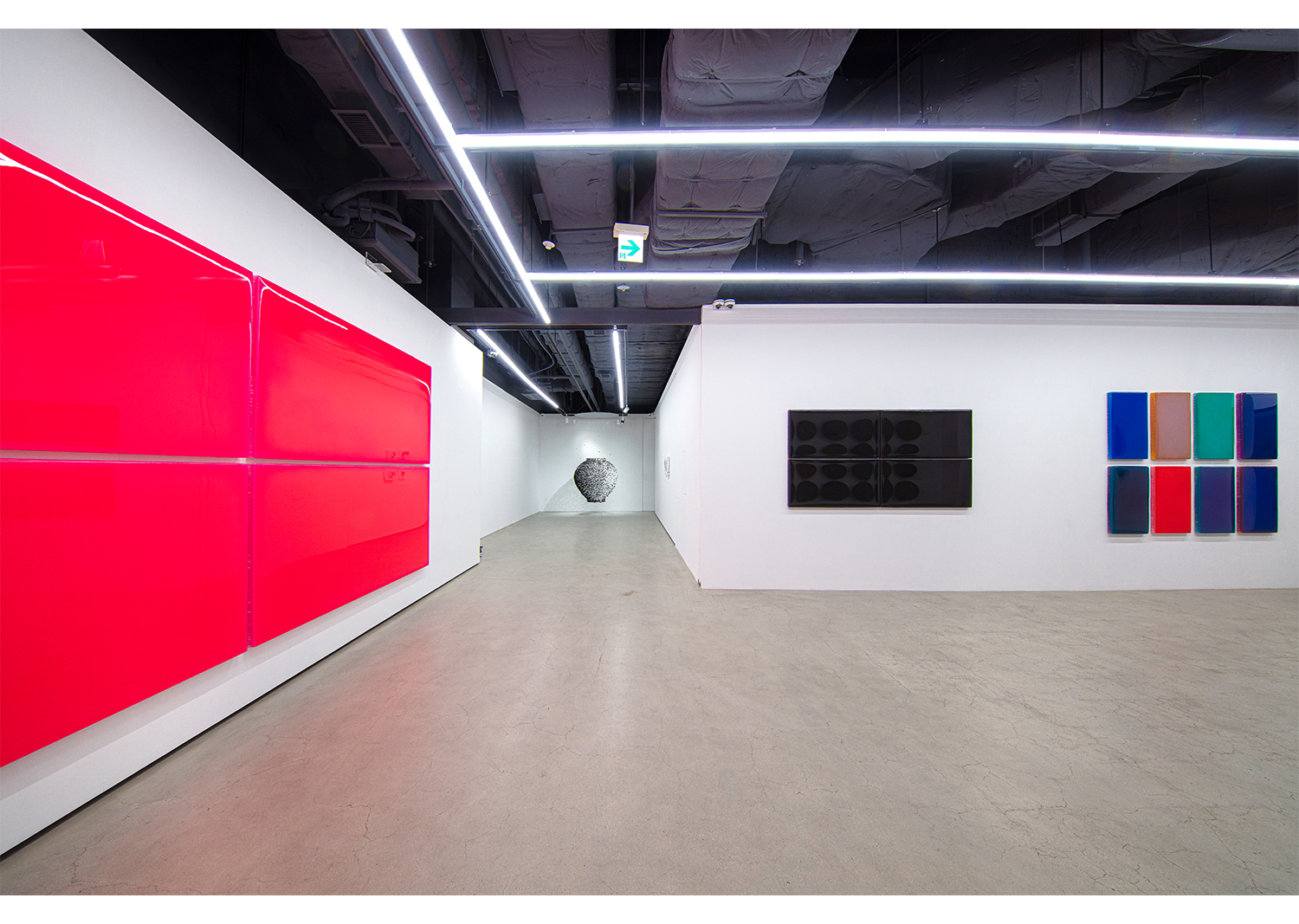 The time that Sisyphus, who has to push a rock up a hill forever while fighting "space without the sky and time that cannot be measured", spent is a question that has been put on hold for us.

Like Ouroboros, the serpent that bites his tail, we merely leave our marks of time as there is no escape from time in the face of the withheld question of Sisyphus.

021 Gallery is hosting a 3-artist exhibition < Trajectory...>, including the works of Lyu Jae-ha, Bahk Seon-ghi, and Choi Sang-hm.

“Trajectory...” meets the trajectory of time projected into the work of those who fiercely explore contemporaneity, building their own world of work that is lonely, vague, but persistent.

The main works, which are floated, hangung, and poured Lyu Jae-ha, Bahk Seon-ghi, and Choi Sang-hm, are similar in that they embody the times of the past process that is formed of verbs with physicality rather than being fixed by nouns. Also, all of the works show colorful individualities.

This exhibition allows the audience to face the resonance seeped with the passion of the artists and their Trajectory of the time.

Lyu Jae-ha is a media artist who breaks the paradigm of genres with painterly and digital visual images.

He presents the waves of art and technology, analog and digital things that lie beyond them, static and dynamic moments, the West and East, and the Trajectory of a modern society in which the uncentered hybrid is intertwined with the past and present. The artist, who has presented painterly imaging and media display installation art, explores the primordial human sensibilities and desires for contemporary beauty and reconstructs them into images about inherited beauty. In addition, he expands the horizon of contemporary art by constructing the concept of 'media-sculpture' with LED displays. // He is also currently working on implementing a video space that has been extended to infinite space through "Void Video ." "Void Video," which seeks to combine eco-friendly living spaces and art spaces based on ecology, floats an image of illusion in real space, inducing new landscapes and imaginations that appear as they coexist in one space. "Void Video" becomes hybridizierung as the real material spaces undergo simultaneous changes through interaction with immaterial imaginaries.

The 'Face' series presented in "Trajectory..." combines a monitor that is a symbol of modern civilization with a cauldron lid that allows the audience to feel the Trajectory of time and displays facial images. The mixture of objects, video images, time, and space possess tradition and contemporaneity through which the audience can meet the trajectories of the time today.

"The distinction between art genres has now become blurred. The era is full of diverse materials and ideas. And now art is not something that only certain people can enjoy. In this era, art lives among the public. In that sense, I believe video media has the strongest appeal to the public. Art represents the time of society. Above all, I want to create work that not only resonates with me but with others."

Bahk Seon-ghi is an installation artist and sculptor who transcends the boundaries of East and West with his painterly and symbolic work that interprets space.

He dismantles and transforms the empirical property into a transcendental physical property giving the audience the experience of contextualizing, decontextualizing, and recontextualizing space. The artist's work, charcoal hanging in space, embodies specific meanings, crosses the boundaries of the past and the present, reality and fiction, variability and permanence, and East and West. In his work of using fragile charcoal to build a solid shape, the nylon strings also play an essential role. The nylon strings not only support and hang the charcoal, but also activate the space by collaborating with the black charcoal. Nylon strings are transparent when they are one, but when multiple strings are gathered, they play a role in activating the space. Charcoal, a burnt remnant, is a byproduct of a tree that was both real and, at the same time, an archetype. Also, the geometric objects like the squares, circles, and columns that the artist has installed in the space are both real and imaginary.

The exhibition showcases the artist's drawings and charcoal installations, including 'An Aggregation.'

"For me, charcoal presents a chapter of nature hidden from the deepest of the surfaces, left behind by the burning of wood as the result of a geological or natural combustion. / In the end, it is a material in my conditions of existence, and the derivative effects that conform to its presented form begin with this material. After all, charcoal is like a brick in the form of architecture.

Over time, what is manifested in the work becomes transferred to a visually simple, lightweight material. To me, the poetic expression of hanging penetrates the inherent environment, architecture, and the lightness of a truly unstoppable sculpture."

The work of Choi Sang-hm differs from the traditional 'painting .' His work is called "multi-layered resin mortar casting." The artist creates his work by pouring paints of the colors he mixed himself into a frame he made.

To create his work, the artist repeats the process of 'drawing without drawing' by pouring a construction material made with a mix of hardener and acrylic paint into a resin mortar and waiting for it to dry. The high surface reflectivity and density of colors revealed in the artist's façade are due to the physical properties of these materials. His method of working, in which he lays down a canvas on the floor and carefully pours paints, also shows his attitude of not wanting to go against the physical properties. The work is followed by countless times pouring paints and waiting for them to dry. The subtle breaths between the layers are determined by the physical state and environment of the medium. The artist also conforms to this illogical method and does not go against the tedious and repetitive act. Thus, his screen reaches a state of insistent superposition of layers and becomes the source of deep colors and a mirror-like surface. His colors, the result of his penance as an ascetic, are paradoxically heavy, and his time is close to agony.

His work, the space in which the light of real nature and its existence is developed into colors, is the volume of time in which light is monolayered.

"I repeatedly pour the paints over and over until I choose to stop. The moment is determined by looking at the density of the layers created at that time, not logically. The reason for the repetition is simple. Life repeats itself each day. Its continuity gains its significance as a regular order. Discipline and rules conceptualize chaotic existence and gives meaningless things life. This is why I have decided to set this process in art."